Santa Barbara County Firefighters have stopped the forward progress of a three-acre brush fire near Buellton.

At 1:20 p.m., firefighters along with an air response arrived two miles north of Buellton, in-between the 5800 and 6000 blocks of Highway 101 off the southbound lanes, for a brush fire. They found 1/8 acre of medium fuel burning at a slow rate of spread.

Crews quickly put in a hose lay to surround the fire and with the support of a helicopter, successfully stopped the forward progress and knocked the fire down at three acres.

There were no injuries and no structures threatened.

Caltrans closed the number two lane of southbound Highway 101 just north of Jonata Park Road. The number one southbound lane and both northbound lanes remained open. It's unknown when the second lane will be closed. 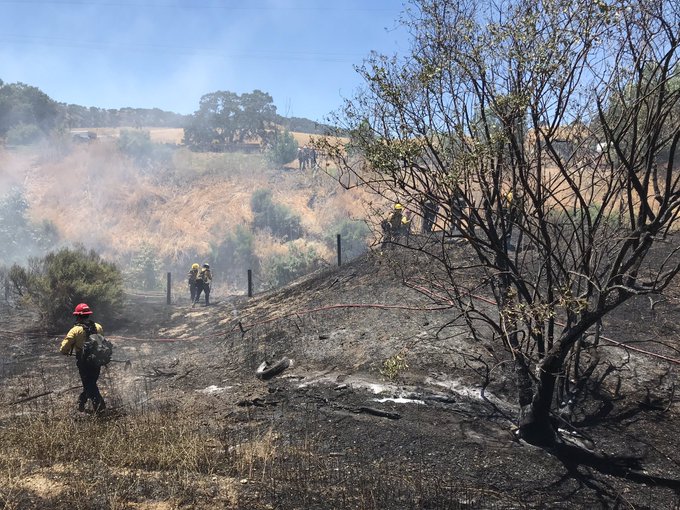 Is this near or caused by a homeless camp?

I don't believe there is a homeless camp in that area.

I don't know I don't camp there.

From CHP: The No. 2 (right) lane of southbound US Highway 101 at just north of Jonata Park Road near Buellton is closed due to a brush fire in the area. The No. 1 (left) southbound lane is open as well as both northbound lanes of US 101. Motorists should be aware of law enforcement and other emergency responders, including Caltrans in this area.

From SBCounty Fire: Veg Fire, 101 SB JNO Buellton. SBC on scene of a 3 acre veg fire. Ground crews are being assisted by SBCASU C-3. Crews have forward progress stopped at 3 acres. No structures threatened. No evacuations. No injuries. Under investigation. CHP-Traffic restrictions

I don't know what kind of fire it is or who started it yet..

2 Copters listed for this fire...Firefighters making good progress number 2 lane shut down, no evacuations at this time.

Fire is at Jonata Park..

Closing the Southbound side of traffic and divert traffic onto the 154..

Heard it was in the center divider too.

County firefighters are on the scene. It's reportedly 1/8 acre fire on the shoulder of the highway. A fixed-wing aircraft is en-route

Flames reported on the off ramp..