On Friday, July 3rd, 2020, at approximately 1840 hours, Santa Barbara Police Officers responded to the 400 block of De La Vina Street for a hit and run that just occurred.  A citizen witness called 911 and advised that a green Subaru had just rammed into a parked vehicle several times and fled the scene.

Kirchner drove towards Officers, while revving her engine at a high rate of speed. Officers had to quickly step out of the way of Kirchner's green Subaru to prevent getting hit by the vehicle. Officers told Kirchner to stop, to which she used her middle finger to gesture at Officers, before making a right onto West Haley Street, driving east.

Once stopped, Kirchner was taken into custody and several empty cans of beer with located inside of the front passenger area. While being transported in rear seat of a patrol car, Kirchner became very combative and began to kick the doors and windows. Officers stopped, and as they opened the door Kirchner kicked several Officers as well as spat on an Officer’s face and N95 mask. Kirchner was ultimately placed in the WRAP restraining device and transported to Santa Barbara County Jail without further incident. 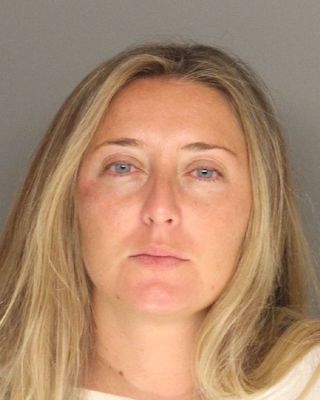 69 Penal code on a police officer?

BUCKWHEAT. Yeah. That is kinda humorous.

Maybe she was trying to de-fund the police.

Or she was heading to a meeting of the local boogaloos. Didn't you see her there?

Good thing she wasn’t smoking weed, or she might have watched a video & gone to sleep, instead of trying to run over S.B.P.D..

So you cry out "Mental Health" and it releases you from "Personal Responsibility"... This is our "new society. You can try to take out a significant other, random members of the public and run over a cop and the perp is given "a Nod" to move on ... Unbelievable.

There must be so much more to this story...What in the world was going on with this girl to prompt her to go off the deep end? Sounds like she may be dealing with some very tough stuff. Thankfully she didn’t hurt anyone. Sounds like she needs some serious help. Can’t imagine what her family must be going through.

Agree, she needs serious help because she is a serious menace to society! She showed lots of layers of not caring about others during this escapade, as well as not caring about herself and her own future! She could have killed people with that car.

Seriously? She should find a less threatening-to-life-and-limb way to deal with her crap! As most people do, even when drunk.

Is she out yet 50,000 Bail seems like very little for what she did.

Talk about a cascading series of bad decisions!

"Kirchner drove towards Officers, while revving her engine at a high rate of speed."
That is attempted murder. Let's hope that she's not out free for a long time.

Agree, attempted murder. If the officers hadn't of moved out of the way they very well could have been killed. Under the influence of what I wonder. And if there are mental issues on top of it and what the plan is to get her help before she kills innocent people...

I wonder if she was in a drunk black out. The thinking part of her brain appeared have been turned off.