Santa Barbara County Firefighters have stopped the forward progress of a brush fire on both sides of Highway 101 near Fairview Ave in Goleta.

Fire crews arrived on the scene around 2:30 p.m. Friday and discovered a brush fire started inside a homeless encampment on the south side of the freeway. It had then spotted to the northside of the freeway burning behind commercial structures.

California Highway Patrol shut down the north and southbound lanes as a mandatory evacuation order were issued for the nearby area and buildings, including the Motel 6.

Firefighters were able to quickly stop the forward progress of the fire and as of 3:45 p.m., have completely knocked down the fire. Crews will be on the scene for several hours for an extensive mop-up of the area.

There were no injuries or structures damaged. The official cause is under investigation.

CHP has now opened the number one south and northbound lanes. Traffic remains heavy in the area. 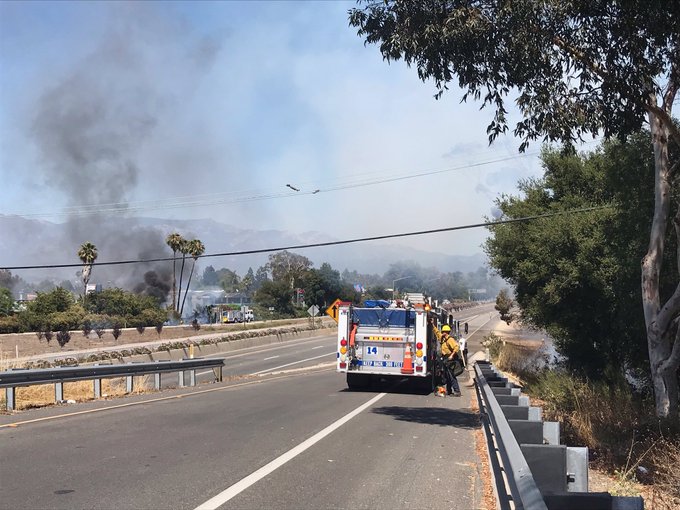 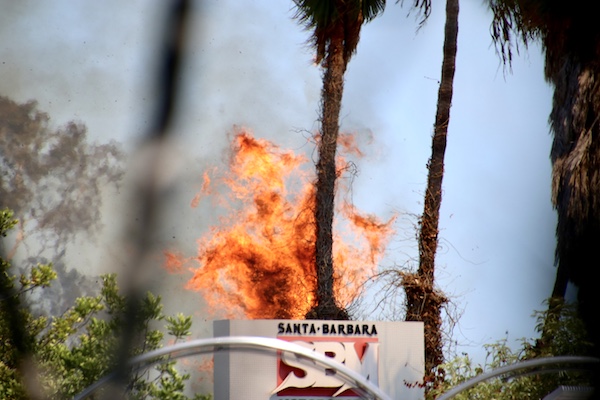 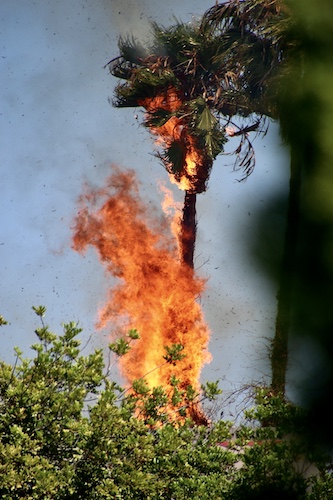 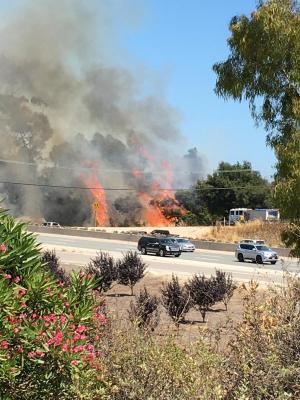 Photo by an edhat reader
Login to add Comments

Southbound on ramp at Fairview closed.

Reverse 911 calls going out to residents on South Fairview, Magnola, and Orange Avenue in case of possible evacuation..

Possible flames now on the Northbound on ramp...

Fire now across the freeway...

Huge flames reported now on the Northside of the freeway near Zodo's and the car wash Firefighters checking homes in the area...

Hearing the fire is knocked down pretty good on the Southbound side of the freeway...

Last I heard they were getting a handle on this fire..

I'm not there just reporting what I am hearing...

Any news on the evacuation area??? I’m on Calle real and Kellogg but haven’t received a reverse phone call!

Mandatory evacs have been cancelled. Looks like they are getting a handle on it.

If you haven't received a call I would not worry unless the flames are close.

Dumpster on fire behind the butcher shop.

I didn't know the president was in town!

Seabird won the Internet today with that one :)

Forward progress of the fire has been stopped with extensive mop up.

As always, thank you Roger! I get more accurate information from your reports than Nixle/County Emergency.

There is always 805 breaking news on Facebook too but the guy is moving out of town in a few days a big loss to Citizen Reporters in Santa Barbara he has video on the fire.

I guess that is the way the homeless clean their camps now...

Nice work Roger! Thanks as always.

This should be a wake up call for anyone who lives near lake Los carneros. That park is severely overgrown and has accumulated an explosive amount of dead and dry fuel over the years. It is also inhabited by a number of transients. If the community will not clean out all the dead foliage in the park, it’s only a matter of time until one of the transients starts a fire and it all burns down.

Thanks Rodger !
I drove by, when this was happening...looked awful, but the fire, police, were on it.
My only comment is, they have DUI, check point, in that area tonight...good idea, with a holiday weekend.
Why can't they do a HEC...
Homeless encampment checkpoint ?
There have been so many of these...
Pull resources, from fire, police..

Resources are stretched out over the virus and other things there really isn't alot of police officers here in the area per residents, tourists, and homeless they do what they can with what they have. There was a camp clean up in the 3900 Block of State street yesterday.

DUI checkpoints are often funded with grant moneys from the State or Fed govts. Find a grant to pay for HECs and it'll get done... eventually. As we keep asking local govts to do more with less it's no wonder they keep falling short.

Only a matter of time until they burn down a tract of houses and kill someone.

It already happened in Paso Robles. Several houses burned. No mention of the bum camp being the cause. Only the overgrown brush. Like it spontaneously combusted. Just put your head in the sand and ignore the REAL problem!

And call it a hobo camp rather than a homeless camp.

But you can't SAY that. These are culturally deprived, oppressed victims of a Capitalist society. You may not demean them by calling them bums, vagrants, hobos, scammers, grifters, derelicts, drunks, winos, scumbags, or shiftless, lazy, irresponsible gypsies, tramps or thieves. They prefer to be called Carefree Ramblers.

I'd much rather be called a Hobo than Homeless...

Again with the bum word. Well, at least we got a short break.

When I was a kid we had a guy in the area named "Hobo Jim" or "Jim the bum" . Both not aggressive enough for the type of behavior that he had. Some of my best friends were inaugurated to alcohol, weed and other drugs and then he would molest them .Big deal court case in the 70's.Screwed up those people bad.One had anger issues so bad he kicked a bum to death near Haskell's and went down a road of anti-social behavior ending with his murder and the other one just killed himself a couple of weeks ago. The shit these people get away with has long lasting/reaching effects.There is NO rehabilitating those types of people,but keep giving them money so they can continue their "lifestyle"
LOLOLOLOL.

But hey, try and have a barbecue or fire on the beach and you’re in big trouble....
There are multiple vacant military facilities that can be used for housing these folks in this lifestyle.

There are multiple vacant military facilities in Santa Barbara County that can be used for housing these folks? Why, we'd have to be idiots not to open them up for these people! Unless, of course, said housing does not exist. And unless there are some in the high desert somewhere that no sane person would want to live in. And unless there was no funding to support these people once they got there. And unless.......well, you get the picture.

Which costs the taxpayers more? Cleaning up these "camps" first or using all our police and fire fighters to hopefully extinguish the fires before it destroys public and private property. Not to mention the loss of all the trees and wild life habitat.

A local police officer told me that in the times of Covid 19 the campers can't be moved. They are told to "shelter in place." We saw some move around yesterday out of Fairview to Ellwood camps. Not safe, especially in fire season.

There were several fire trucks/emergency response vehicles out there again this afternoon...hoping it wasn’t because ANOTHER irresponsible fire got out of control. What has to burn down for the increase in camps to be addressed seriously?

It was another fire same spot but might have been a different set of circumstances.

If you add up all of the police and fire time spent responding to homeless incidents, is it enough to create a place where they can live without starting fires?

I think the 2nd fire there might have been arson I don't know about the first...Police arrested some homeless guy for lighting something possibly a firework on fire last night..Too bad they did nothing about all the assholes who were lighting fireworks all over town..Blame the homeless but let the law breakers go..

Roger, KEYT last night was reporting 27 citations for SB City. Which was better than LA City, who issued 1 citation as of Sunday night.

Add up all the public and commerical space already abdicated to the vagrant population, particularly parks the public can not longer safely use while we continue to pay for their maintenance and security; the RR corridor which is our welcoming entry to our city; freeway access ramps; all creek sides and bike paths; Mission Creek concrete channel; new State Street mall dining and business entrances, church yards, TV Hill, beaches ...... just a partial list of spaces already turned over by city policies allowing unhindered vagrant occupation. Cheaper to buy up Trona and pay for one way bus tickets. Mission accomplished. There is nothing enlightened about our current vagrancy policies; nor our immediate aquiesence to ACLU demands - they cannot make unlimited unfunded mandate policy demands at our sole local expense. Violates due process. Get a new city attorney who knows how to fight back. Get a new broken-windows police chief with a back bone and home in the city where they can keep track of what needs to be done, 24/7. Not treat this position as a part time job. We are currently badly served in both positions.