Though Santa Barbara had not been aware if the earthquake was isolated or part of a bigger California wallop, the rest of the state had a pretty good idea what had happened.

The southbound Pickwick stage bus left the depot at 514 State and was just turning left onto Haley when the earthquake hit. Behind them on the opposite corner, the walls of the Central Hotel blew out and dropped on a man standing next to it. A quick-thinking passenger grabbed his camera and shot the stonework of the Lomas Drug Store tumbling down to the street below. When the bus pulled into Ventura nearly an hour later, the excited passengers quickly spread the news. Upon reaching Los Angeles the media gobbled up their stories and the passenger’s photos were scooped up by one of the newspapers.

Other motorists passed the news to the outlying communities all of whom had felt the shake. From Oceano to Porterville, Bakersfield to Anaheim, Long Beach to Ventura, dishes, windows and nerves had been rattled.  Sunday morning's headlines had reported "Large Earthquake Rocks 4 States".  That quake, centered in southwestern Montana, had struck Saturday evening and was felt over 500,000 square miles.  Wild speculation was the Montana event had “loosened things up” and triggered the faults in California.

Telephone and telegraph stations were immediately aware of downed lines “somewhere” and were quickly able to pinpoint Santa Barbara as the troubled area.

Around 10:00 a.m. the first airplanes started buzzing over the city. The Los Angeles Times Herald and other newspapers had reporters and cameramen aboard to record the scene. The Los Angeles Elks sent a plane with $5,000 to be “distributed as needed,” and Los Angeles mayor George E. Cryer commissioned a pilot to personally deliver a message to Herbert Nunn, the city manager, offering “every aid and assistance within our power.”

The reply back was “Due to the light number of deaths and injuries, medical personnel are not needed. If you can, send bread and milk in the morning.  It will be appreciated, Also, cooked foods.  The reason for our desire for cooked foods is that all gas has been turned off and no fires will be lighted at present.  We have no electricity." 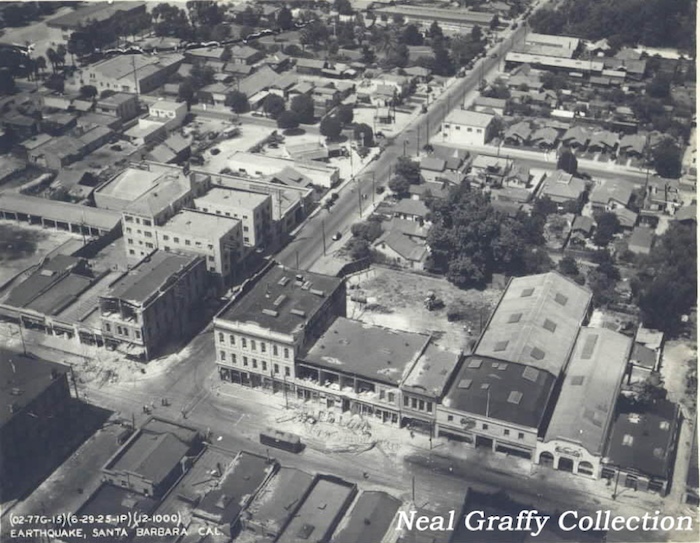 A view of the intersection of State and Haley looking towards Anacapa.

Across from the pictured streetcar, the entire second floor of the Grand Hotel did a near-perfect face dive onto the sidewalk and unfortunately, Ralph Litchfield. An employee of Shell Oil, the twenty-six year old Watsonville man was in town to prepare for the opening of their third Santa Barbara gas station.

The building deep in shadow just above the lower left corner of the photo is the Central Hotel (formerly the site of the Santa Barbara Brewing Co. at 501 State St. and currently The Cruisery). It had opened in 1871 as the Shaw House and was Santa Barbara’s oldest hotel. As the building shook to its death, it rained its brick skin onto forty-three year old Merced Leon who died instantly. A few feet away, Geraldo Chavez and Cicile Gomez were also crushed and killed. Across the street, the three-story Lomas Drug Store lost the front of its first and third floors and would be torn down. This corner is now (well last time I looked) Hibachi, Cold Stone, and the Natural Cafe or as many old timers recall, the old Salvation Army Thrift Store. The Faulding Hotel at 15 E. Haley stands intact behind the Lomas building. 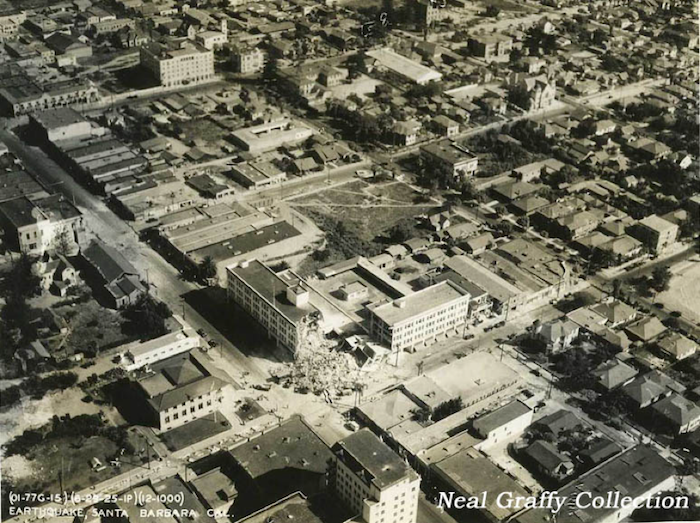 Looking at State and Anapamu.

The big victim here is the 4-story San Marcos Building. As the earthquake literally rolled through with  “the ground undulating like waves on the ocean” the State Street and Anapamu corner sections tore into each other like two hip-slamming roller derby queens and then collapsed. Taking the ride down from the third floor was orthodontist Dr. James Angle. In the basement was Sigismundo Mosteiro, the building’s maintenance engineer. They did not survive. Miraculously, as this photo is taken, there is still one life hidden in the rubble.

At center bottom is Santa Barbara’s only “skyscraper” the Granada Building which suffered minor damage. Across the street, the Post Office, now the Art Museum, had little damage, although a World War I cannon, at the corner had spun completely around. The lawn to the left of the Post Office shows the tent and table constituting the Red Cross’ “Canteen #2.”  The debris showing in the street across from the library and Post Office is from the San Marcos Building. With no time or place to take the removed rubble, it was simply towed, pushed or prodded out of the way along Anapamu Street. The white car just above the edge of the Granada Building roof is the ambulance/hearse of the McDermott Mortuary waiting to perform whichever task would be needed.

At top, just below and left of center is the Carrillo Hotel. It was widely reported by the out-of-town press that the Carrillo had “split in half” but it actually just had a few fractures and bruises and following repairs was back in business again. Many years later it was torn down and replaced by a giant hole in the ground which later became the Hotel Andalusia and is currently the Canary. 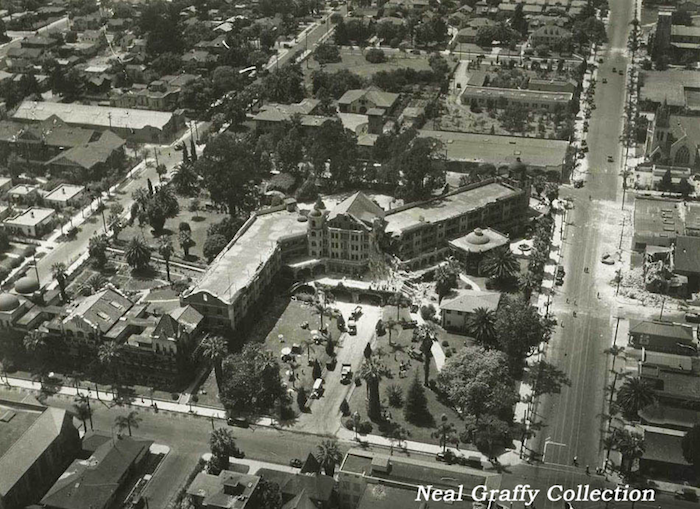 The Arlington Hotel (above) spanned the entire block bounded by Victoria (foreground), State (at right), Sola and Chapala streets. It opened in 1911 and boasted of being “entirely fireproof” as its predecessor, the first Arlington Hotel, had burned down in 1909. Unfortunately they forgot about the earthquake potential. The big hole in the right side of the main building was the former location of a beautiful mission tower filled with deluxe suites and topped by a 50,000 gallon water tank.  The earth shook, the water sloshed, the two corner edges attempted to rotate the tower between them and down it went taking with it twenty-two year old Bertram Hancock (son of Capt. Allan Hancock of Hancock College fame) and Edith Forbes Perkins an eighty-three year old seasonal visitor at the hotel. They were the only fatalities among the 120 guests.

The section of the hotel at lower left dated to 1888 and had survived the original fire The former Safeway/Vons grocery store was located there until recently. Though the hotel didn’t appear to be badly hurt, save for that one tower, it was demolished and replaced by the Arlington Theater in 1931.

The architect for the Mission-style hotel was Arthur Benton who has two well-known surviving structures in Santa Barbara. Just above the middle left edge can be seen the Edgerly Hotel at the corner of Chapala and Sola which he did in 1913. The All Saints by the Sea church in Montecito (1900) was also his design.

On the subject of churches, the Unitarian Church at the corner of Arlington Avenue and State (just below center, right edge) didn’t make it. On the next corner (Sola) is the Congregational Church which stood until the mid1930s when it was replaced by a nice gas station. At top right is the steeple of the Trinity Episcopal Church. Despite some serious damage it was rebuilt and still stands beautifully today.

However seemingly peaceful it looked from the air, on the ground it was a different matter. 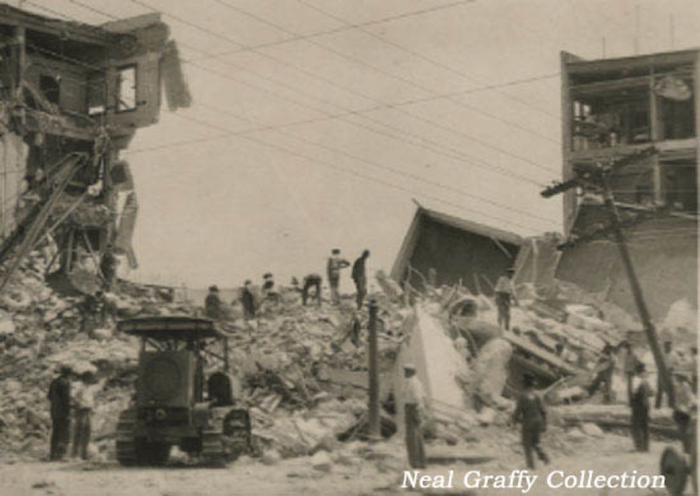 It was known that at least two people had been in the San Marcos Building. Bit by bit men and machines tore into the collapsed corner hoping to find life. Just after 1:00 p.m. as the machines were turned off, one of the workers, Owen Rigdon, thought he heard a voice. 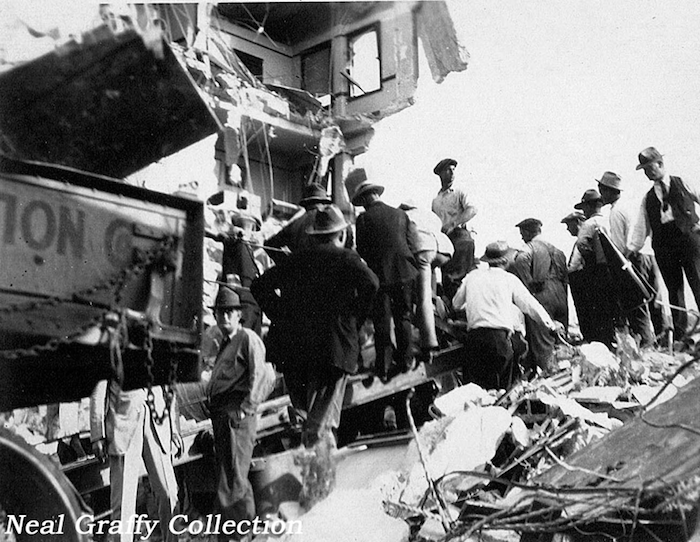 All work came to a standstill. No one dared move. Faintly, a woman’s voice was heard. Life! Cautiously the men dug and found Mrs. Santiago (Macaria) Vilamore. A janitress, she had been working on the fourth floor when the floor gave way and dropped her two stories. Beams and concrete fell just right and she lay in a clear place, though a beam was pinning her leg. Six and a half hours after her entombment, she was finally freed and rushed to Cottage Hospital.  Depending on the newspaper, her injuries ranged from cuts, scratches and bruises to a broken ankle or a fractured thigh and pelvis. 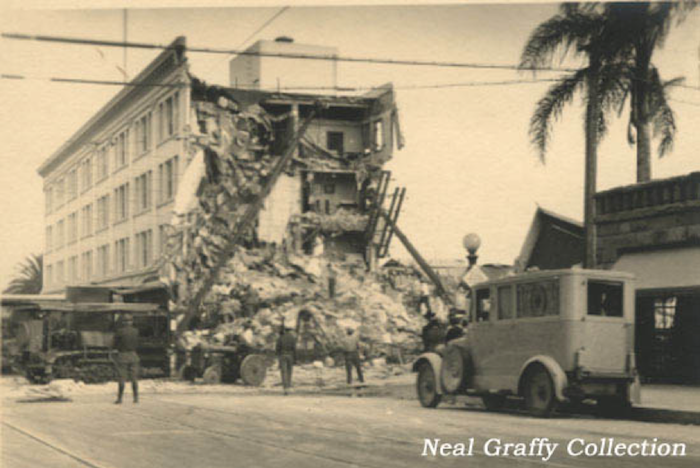 Hopes were now high that others could have survived, but the grim reality revealed otherwise when Dr. Angle’s body was found at 5:00 p.m. Seventy-five men would work through the night searching for Mr. Mosteiro and it would continue for two more days until his crushed body was found in the basement. At right, the McDermott Mortuary ambulance/hearse stands ready. 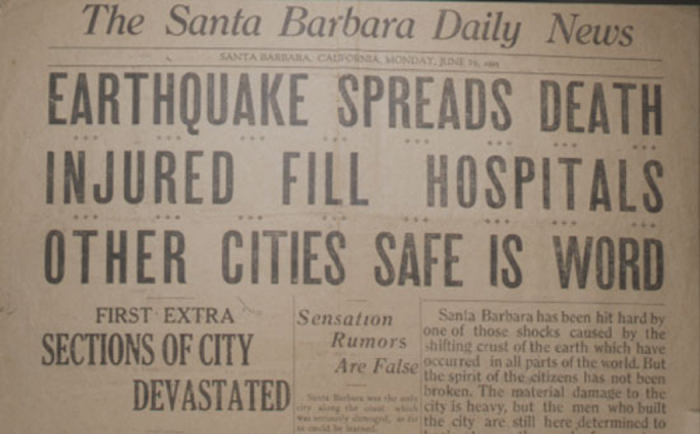 Santa Barbara Daily Press publisher, Thomas M Storke wasn’t taking any chances. Though his three-year old building appeared to have no damage, until engineers could review it, no one was going in. But the news must go through and Storke was able to   produce three editions in a variety of shapes and sizes.  The first edition hit the streets between 10:00 a.m. and 11:00 a.m.  It was printed on one side of a 12 x 18 sheet with a hand press out in the plaza.  A second edition repeated the first edition page, with additional earthquake information on the second side.  Complementing the second edition's earth shattering local news was the inclusion of three articles of important world news including this item from Detroit - "Night plowing can be done easily with a new type of tractor which is equipped with a powerful headlight".

Most importantly, rumors were quashed, known deaths and injuries were reported and important instructions imparted – stay home, don’t build fires, stay out of the business district unless necessary and keep phone and telegraph lines free for emergencies. 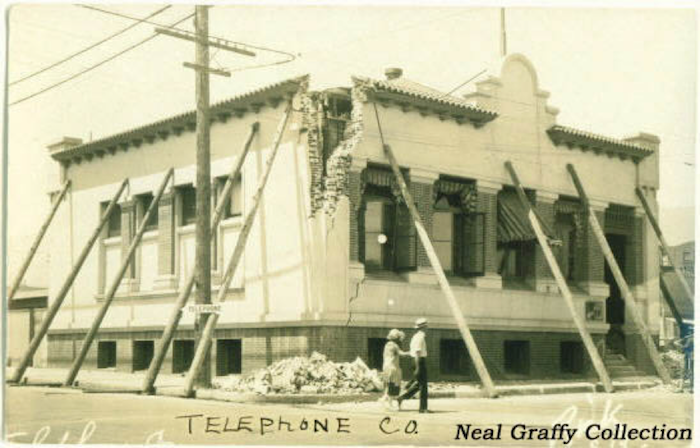 Though the Santa Barbara Telephone Co. at the southeast corner of Chapala and De la Guerra streets (above), was a total wreck, a few phone lines were in service around noon. By 8:00 p.m. some electricity had been restored and lights were working in various parts of the city. Happily the sewage system was up and running that evening although not many dared to venture indoors with the aftershocks.

In spite of it all, Santa Barbara had been fortunate. The earthquake struck when most folks were at home. Deaths, though tragic, were light compared to what would have happened two hours later. Exhausted, Santa Barbarans tried to go to sleep in their yards that night but it wasn’t easy. More shocks, and the engines of the machinery working on the San Marcos Building and Arlington Hotel could be heard along with the pulling, and crunching of concrete, brick and tile.

What would tomorrow bring? 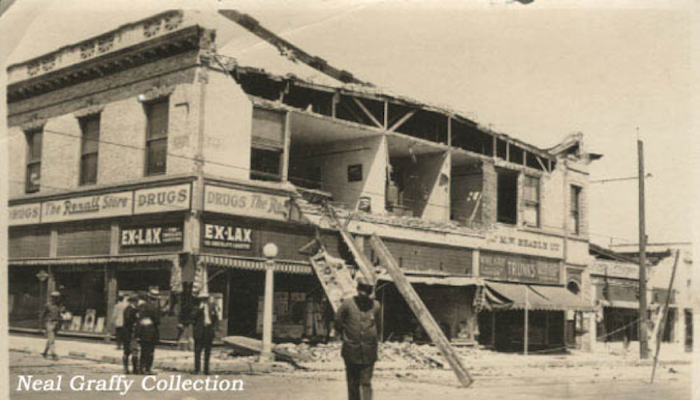 The Rexall Drug Store at the southeast corner of State and de la Guerra advertises just about the only thing no one in Santa Barbara needed that morning. 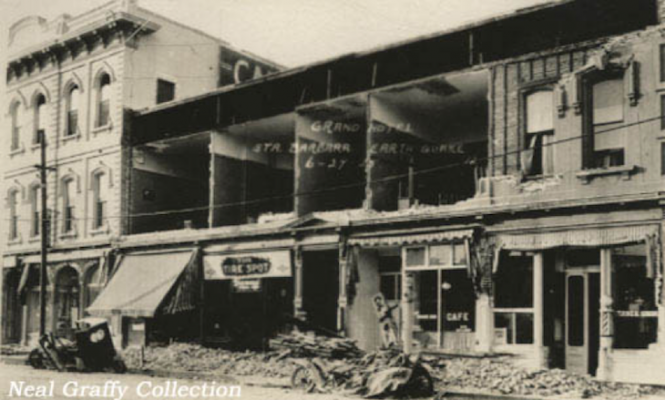 Thank you so much for this and also for Part One!

Perhaps she is a human

I don't feel bad for letting

The path is a great idea.

It really is a nice day!

Odd someone being so

Literally everyone who has

Personally I thought she

I had a friend who had to