The sole occupant and driver of the Tacoma, Oscar Pereyra, allowed the truck to travel across the double yellow lines and into the #1 westbound lane, directly into the path of the Sonata. The vehicles collided within the #1 lane causing the Toyota to overturn onto its roof.  Both vehicles came to rest blocking westbound lanes of traffic.  The sole occupant and driver of the Sonata, a 31-year-old resident of Arroyo Grande, sustained major injuries as a result of the collision and succumbed to his injuries at the scene.

The driver of the Toyota, Oscar Pereyra, sustained major injuries as a result of the collision and was transported to Santa Barbara Cottage Hospital for treatment.  Mr. Pereyra was suspected of driving under the influence and was arrested for Felony DUI.

This collision is still under investigation.  If anyone has any information regarding this collision, or the events leading up to it, please contact Officer Shannan Sams at the CHP Santa Barbara Area office at (805) 967-1234.
Update by edhat staff
11:40 a.m., June 5, 2020

At 10:44 a.m., fire crews responded to the scene near E. Camino Cielo with a ground ambulance. Upon arrival, they found two vehicles on the roadway with extensive damage that appeared to collide head-on.

Highway 154 is temporarily closed at Cathedral Oaks and Paradise Road as CHP investigates the collision. 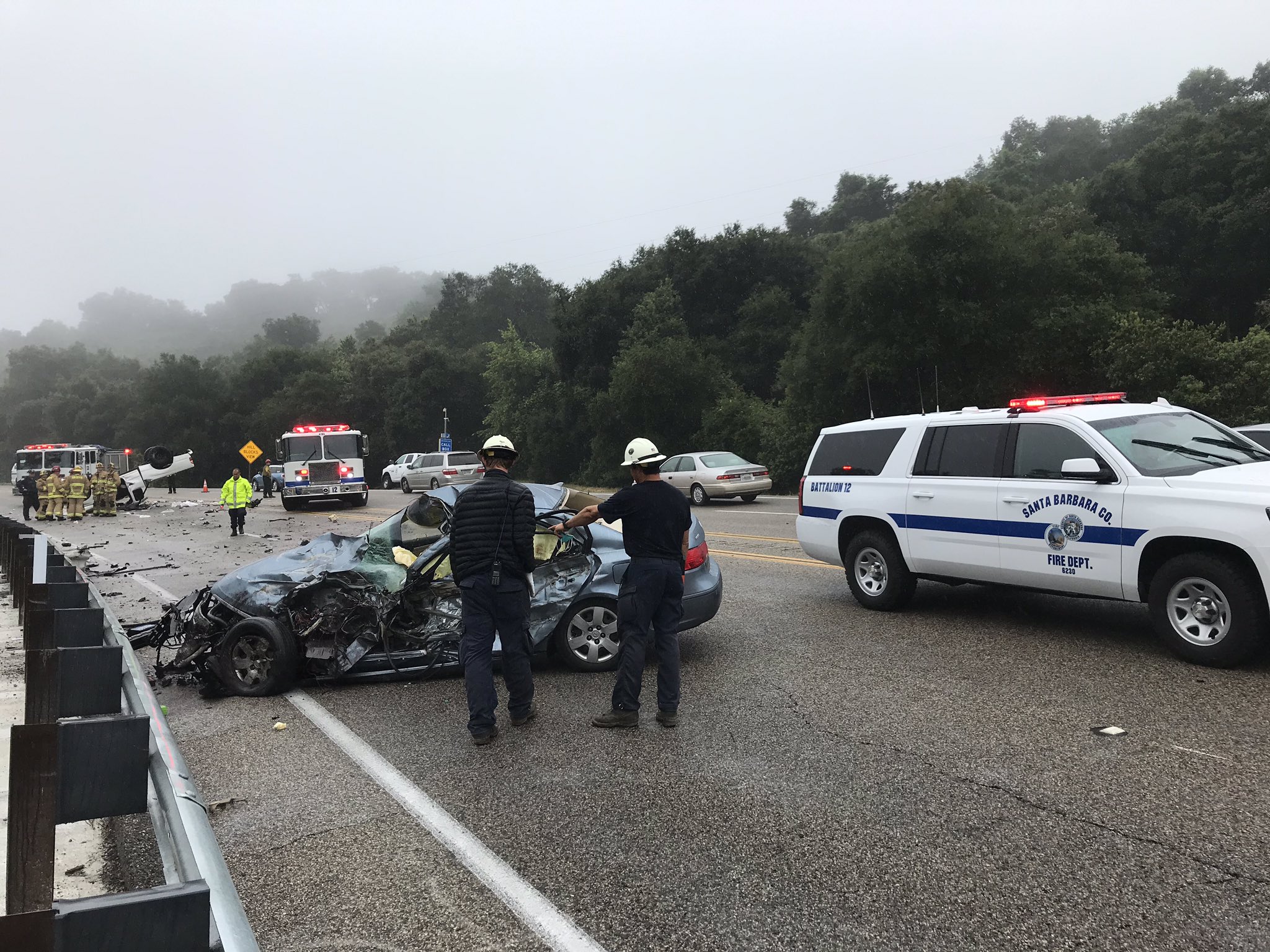 The motorcycle accident was a separate incident. The fatal one involved a white truck and blue sedan around the ECC intersection.

Highway 154 is shut down in both directions from Cathedral Oaks Road to Paradise Road, according to Caltrans.
There was no estimate of when the roadway would reopend, said Caltrans spokesman Jim Shivers. @ 11:20am.

I missed this sorry I'm dealing with family stuff and an injury due to arthritis I can hardly even type it hurts so bad.. The CHP has a Traffic Incident Page which can be GOOGLED and there are other reporters around I don't catch everything sorry Thanks JB86, MOUNTAINMAN Others...Family sucks..

Roger - you don't need to apologize! We appreciate all the time and effort you put in to get the vast majority of scanner reports.

I don't think anyone expects you to report everything Roger, I don't know why you're upset, nobody was criticizing you. Hope you feel better.

Roger... I think most of us worry about you when we don’t hear from you. You’re an important part of our lives. Hope you feel better soon. And, that the family stuff settles down quickly. <3

I hope things are getting better for you, Roger. You are our rock here.

There are a pair of crutches around the truck. One near the front, the other beneath the bed of the truck?

Interesting observation. Oscar Pereyra is suspected of being DUI, but that makes me wonder if he has a medical condition.

Who cares if he has an underlying medical condition if he tested positive for DUI? Even if he had a medical event while also DUI, tough shit! You don't get a free pass, and being under the influence can even instigate a medial event. There is no excuse when a DUI is involved.

SBLIFE — Actually, MY reference to the crutches, had to do with my wondering if whoever it was, was driving while taking pain medications along with, or in addition, to alcohol. I WASN’T intending it to be considered that he would have an EXCUSE for DUI. No one should be driving with any of those possibilities.

Rest in Peace to the deceased - comfort and prayers for the families.

I agree! Very sad indeed. The deceased has now been identified by the Santa Barbara County Sheriff’s Department, was 31-year-old Michael Kai Liu, of Arroyo Grande. What an senseless and tragic loss.

How much was the net on the cold springs bridge? How much would Jersey barriers cost on 154? How many more head-ons do we need to occur before center divide barriers are installed?

Much of 154 is narrow and/or winding. I don’t know if adequate barriers could be placed, leaving sufficient room for safe travel in many areas. And, then if one lane is closed for any reason, how would ANY traffic get by?

I guarantee you placing concrete jersey barriers down the yellow centerline is a recipe for disaster. For every head-on collision, I bet there are 500 or more people that accidentally drift onto the centerline for a moment before correcting, especially on windy portions. Guess what happens if there's a barrier there? High speed crashes galore.

Not only that, but how would deer, etc., cross the road? They'd be trapped in the middle. Barriers are a terrible idea.

That might work for the people that obey speed limit laws. Many people don’t obey the ones in place now.

We need the current speed limits to be enforced.

Officials need to improve this road, by barriers or speed enforcement or something! It’s like an ongoing killing machine. Another tragedy.

No, irresponsible human drivers are the killing machines.

A sobriety check point. But it would have to be 24hours and it has to be randomly frequent. Who would've expected someone to be DUI at 10AM. Is the casino open 24 hours these days?

@Oceandrew, the casino isn't open. Does not open until Wednesday.

DUI at 10:40am. This guy has done this before. There is no way he doesnt have priors and a family that knows he's a drunk.

The guy is DUI and you all want to talk about speed limits and barriers. Genius.

I drive that road over and back every day I go to work. Several times I have had to take evasive action when an oncoming vehicle crossed the center line. I succeeded in avoiding a collision - but may not be so lucky next time. Barriers are needed - no ifs, ands or buts!

Barriers have their own dangers. They take up space and thus narrow the lanes a bit. Have you driven in construction zones with narrow lanes created by barriers? Scary. And another poster said, animals would get trapped or confused. Maybe better policing of erratic drivers, speeding drivers? Drunk drivers cause problems everywhere and we haven’t come up with solutions yet.

State law regulates highways with barriers. Would not accomplish any reduction in speeds or increase in safety.

The (now deceased) driver of the Hyundai Sonata, according to the Santa Barbara County Sheriff’s Department, was 31-year-old Michael Kai Liu, of Arroyo Grande. Very sad.

God, that road is awful. SO so so many accidents over the years.

And this morning a cyclist riding up from Santa Barbara approaching the pass in dangerous curves and then later a Step UP biker doing the same. There is no shoulder room in many areas! Geez!

Oscar should have an easy record for them to search.

Last time I saw him it was at the Valero on La Cumbre checking the trash for cans to recycle.

He is a long time addict should of never been driving

Cameras and tickets by mail!

That'll work, it's kept me from shopping in Ventura for the last 10 years. lol