In order to prove that a defendant is guilty of this crime, a defendant must have committed a misdemeanor, infraction or otherwise lawful act in an unlawful manner, which was dangerous to human life under the circumstances of its commission, and was committed with ordinary negligence.  The difference between this offense and the charge of gross vehicular manslaughter, a felony, is the degree of negligence. Ordinary negligence is the failure to use reasonable care to prevent reasonably foreseeable harm to oneself or someone else.  Gross negligence involves more than ordinary carelessness, inattention or mistake in judgement.  A person acts with gross negligence when he or she acts in a reckless way that creates a high risk of death or great bodily injury and a reasonable person would have known that acting in that way would create such a risk.

Ms. Mijangos was driving the bus during the incident in which [67-year-old Eve Debra Johnson] was killed and another was severely injured, while both were waiting at the bus stop at the corner of Chapala and West Figueroa Streets.   Several passengers on the bus also sustained injuries.  The incident occurred in the first block of West Figueroa Street near the Transit Center for the Metropolitan Transit District.

The case was investigated by the Santa Barbara Police Department with assistance from the California Highway Patrol.  The prosecution of the case has been assigned to Deputy District Attorney Sarah Barkley.  The defendant is scheduled to appear for arraignment in Department 8 of Santa Barbara Superior Court on August 17, 2020. The District Attorney’s Office Victim-Witness Assistance Program is available to provide resources, referrals and criminal case status to victims of this incident.  Contact (805) 568-2408 for assistance. 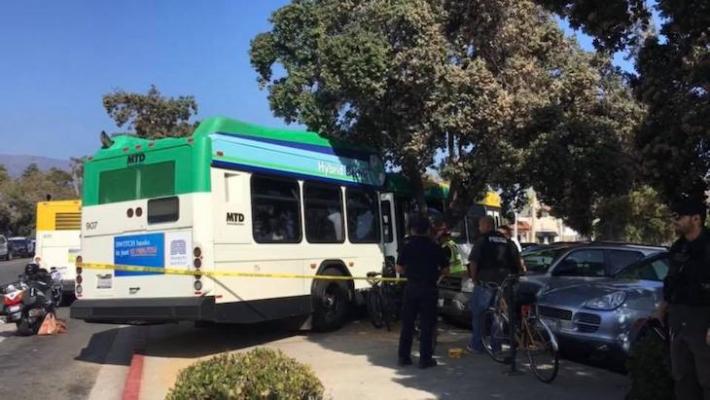 I'd like to know the rest of the story: what was the driver doing that led to this disaster?

EXACTLY! Dump that entire second paragraph and tell us what happened.

Other questions that come to mind are: was the driver put on paid or unpaid admin leave, with or without benefits, during this time? But since our newspapers are a shell of their former selves, unless the Indy wants to follow up on this, we will probably not know any more until the arraignment. Unless one of us wants to do some unpaid sleuthing and those records are available to the public?

As an outside and watch that stop often I think she should sue MTD. They moved a bus stop too close to the corner. She was forced to make a sharper turn to an unsafe point she was unable to over correct the wheel.

Unless she was on her phone or drunk, this seems a bit heavy-handed. I wonder if it’s just a way for MTD to escape liability.

The buses MTD run are too large for our streets and most of the time many of them are virtually empty even before this pandemic.

ok that is what i have been saying too! i am glad someone else feels the same. I feel like the town would be better served with more small buses, like the trolleys, than these large honkers. They are too big to make turns on our small streets

Yet those Drivers manage to make those tight turns every day..... Don't criticize the drivers if you've never been in the Drivers seat of a bus. When the Schools and Colleges are in session, the vast majority of those buses are full, seated and standing. Smaller buses would mean more people left behind and not able to get where they need to go.

smaller buses could run more frequently. i have seen people have to reverse or move forward out of the way for a bus to be able to make a turn, especially at some of the intersections on chapala up from the bus loop. our streets are small and only getting more congested. yes, i have seen the buses near the schools fuller, but many other routes are lightly traveled, and again, having more frequent smaller buses could be a solution there. also, you absolutely don't have to have worked in an industry to criticize question a portion or operation within it. otherwise, none of us would be allowed to criticize the police like we as a country are doing now?

The buses are virtually empty because the SBMTD fare is grossly overpriced. The longest route takes surface streets and the freeway from Storke/Hollister in Goleta to the Transit Center downtown and runs a length of 9 miles over 45 minutes and costs $1.75. An economical car can get 30 miles/gallon, and a 1/3 gallon of gas is at it's most expensive recently is $1.33, for a trip that would take about 10 min. So $1.33 for 10 min in your own car, or $1.75 for 45 min in a dirty bus? Of course I'm not factoring in maintenance and insurance, but the time saved (over one hour round trip) and fare (almost a dollar more round trip) certainly makes up for that.

8 months later and the driver is just now being charged? Why the delay?

Just like I told you all, the management there, THEY DONT EVEN CARE ABLUT THEIR OWN!!! this is 100% proof!

What percent of SB County

UCSB is offering the vaccine

He WAS out and noting these

I love you, General Tree.