The Scorpion Fire on Santa Cruz Island is now 90 percent contained with over 1,395 acres estimated to have burned.

A crew of Santa Barbara County firefighters assisted the US Forest Service & National Park Service. The fire began Sunday morning near the pier at Scorpion Anchorage in the Channel Islands National Park

The Scorpion Fire on Santa Cruz Island is 80 percent contained with over 700 acres estimated to have burned.

Overnight, 49 wildland firefighters contained the blaze to the northeast of the road that leads from Scorpion Valley to Smugglers Cove. They constructed a fire line from the road to the coast near Smugglers Cove.

A 20-person wildland fire crew from the Monterey District of the Los Padres National Forest is on standby in Ventura if additional hand crews are needed on the island. Air assets are also standing by but not expected to be deployed.

At this time, no structures have been damaged or are threatened by the fire and there are no injuries.

The park transportation concessioner, Island Packers, has been ferrying the fire crews to the island. Today, they resume service for the public to visit the Channel Islands with trips to Prisoners Harbor on Santa Cruz Island and to Bechers Bay on Santa Rosa Island.

Today at approximately 10:30 am a wildfire started at Scorpion Valley on Santa Cruz Island. The fire was first reported by the construction crew who are building a new pier on the island. Ignition source for the fire is yet to be determined.

The fire quickly spread east from the valley and by 2:30 pm was estimated at nearly 60 acres. A crew of 20 Hot Shots with Los Padres National Forest Service are responding along with air support.

Air response will include retardant drops from a C130 tanker arriving from McClellan Air Force Base in northern California, two CAL Fire 1,000-gallon air tankers out of Paso Robles Air Tanker Base, and water drops from a Santa Barbara County Bell 212 helicopter.

“The National Park Service is working with United States Forest Service to contain the fire on Santa Cruz Island,” said Channel Islands National Park Superintendent Ethan McKinley. “Firefighting on an island can be challenging, but we have been able to quickly mobilize our initial response.” 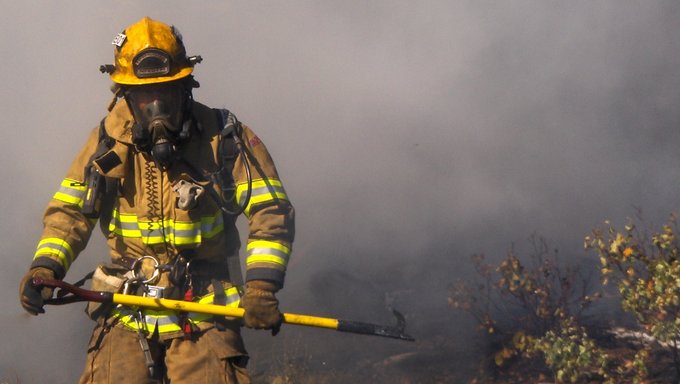 Brush fire on Santa Cruz Island, a helicopter is flying out.

Haven't heard anything else, posted.

Copter 3 responding to the report of a Structure Fire on Santa Cruz Island...heard it again..

Really?..
What king of knuckle-head starts a fire on the islands?
It's a Native grave-yard & super windy...

I wonder why they feel compelled to fight it. I’d just protect the buildings and let nature run its course.

There are Bald Eagles that the National Parks Service took great pains to re-establish after their population was decimated by the use of DTT early in the last century. The entire ecosystem of the islands was disrupted as the Golden Eagles took over afterwards. It's in the interest of "nature" that the Bald Eagles continue to thrive there and are not impacted by this apparent structure fire, so I completely understand why they feel compelled to fight it.

What is DTT? I know what DDT is but haven't heard about DTT.

Thank you for the correction. I use dithiothreitol (DTT) on a daily basis as a reductant, so it's an understandable mistake.

BTW, the major impact from DDT was to brown pelicans, not bald eagles. The Park Service has made several significant management errors on the Channel Islands. The introduction of golden eagles was only one of them.

The Park Service didn't introduce Golden Eagles. Golden Eagles took hold with the demise of Bald Eagles due to the effects of DDT. It made the egg shells too thin and they would break. The Golden Eagles preyed upon the Island Fox. As part of the restoration project along with destroying the wild boars that were destroying the habitat on Santa Cruz Island, the Goldens were trapped and relocated. Bald Eagles were incubated, hatched, raised by Bald Eagle pairs on Catalina and then transferred to Santa Cruz to fledge over a period of 5 years as a restoration settlement with the DDT company that dumped barrels of it into the ocean down south when it was banned. DDT moved up the food chain to the Bald Eagles. In 2006, the the first bald eagle chick in 50 years hatched in the wild on Santa Cruz, a live cam was setup and an amazing journey for viewers created education and devotion for hundreds of new supporters of the cause. There are several nests now and a flourishing recovery of Bald Eagles along with the success of the recovery of the Island Fox. That is why you don't just let the island burn.....in a nutshell.

A few facts you either got wrong or are missing in your detailed comment: They were not "boars" (the 5,036 that were killed), they were feral pigs. Not the same species. And the Island Fox became easier prey for the Golden eagles when the program to eradicate the wild fennel on the island backfired. When the fennel was removed, much of the refuge from the eagles was removed, resulting in the foxes becoming highly vulnerable to attack. A food source for the Golden eagles was feral pigs. When the pigs began to "disappear" (slaughtered), the eagles turned to foxes as a food source. As for the reintroduction of Bald eagles to Santa Cruz Island, many of the eagles didn't want to be there, and some were even found floundered in the open ocean, as they attempted to return to their natural habitat on the mainland.

02:48: Please do at least a little bit of research before disputing others or presenting what you simply believe to be facts. 1. There is no separate species of "wild boars" in N. America. They are all introduced feral pigs. They are/were all the same species that most people call ham or bacon. 2. There is no such thing as wild fennel on the Channel Islands. Sweet fennel a highly-invasive species that was introduced by ranching less than 100 years ago. 3. The Channel Islands are the natural historical habitat of Bald Eagles as well as the mainland. That is not the case with Golden Eagles. I could find reports of only three of the initial 24 introduced birds left the island after introduction, and 2 of those were successfully rescued and reintroduced. Today, more than 60 Bald Eagles happily call the islands home. Yes, it is a delicate balance and the many collaborating scientists are still discovering the unique dynamics of these fragile isolated ecosystems. I am glad that they are using science to guide their decisions.

Domestic pigs have been bred to be large-bodied to produce more meat for us. Even with the morphological changes brought about by going feral - the flatter face and heavy fur - they don’t look the same, and they don’t behave exactly the same, either. Feral pigs and wild boars are different beasts.

Santa Cruz island must have burned occasionally before the first man ever set foot on it. I would also be very surprised if the Indians didn't start fires on the island, either accidentally or intentionally, before it became a ranch. Finally, I would imagine the sheep that used to inhabit the island must have consumed a significant amount of vegetation. Were the sheep helping to manage the fuel loads and reduce the the fire hazard on the island for all those years?

Idiot. It is nesting season for the Bald Eagles and many other native island species. They have vulnerable young who cannot yet fly away as you suggest. The Island fox kits have not learned yet to fend for themselves outside of their dens. Before you suggest that these babies are just left to burn alive, consider the millions of dollars of your tax money that have been spent over recent years to re-establish and protect them there. Each animal represents perhaps tens of thousands of dollars in your taxpayer assets. Will you protect them now?

CHIP - "the Indians?" There were no Indians living on (or even visiting Santa Cruz) before it became a ranch.

According the the Channel Islands website: " Archeological investigations indicate that Santa Cruz Island has been occupied for at least 9,000 years. The island was home to the largest population of island Chumash and developed a highly complex society dependent on marine harvest, craft specialization and trade with mainland groups. " Several villages were on the island. In the 1700's the Catholic Church "converted" the Chumash and by 1822 they were removed from the island.

When we went hiking on SC Island in 1969, my friend found an arrow head and gave it to me. I still have it. I guess you think he planted it there? Pretty clever (and extraordinarily talented, if he made it himself) for a 16-year-old.

12:31 - Yeah, the Chumash were there, obviously. However, no Indians arrived until they started visiting the area on vacation and going on snorkeling, hiking, kayaking tours.

I was researching a different topic a month or so ago and CINP 2017 paper states that the Pacific was 400 feet lower at the time of the Indian presence 9,000 or more years ago.
If you check out the depth of the ridge between Point Conception south to San Miguel Island it is currently 400 feet in depth.Some of it still pokes up out of the water,like Wilson rock etc. Coincidences like that tell me that the original indian tribes could access the islands with out getting very wet.So animal species didnt have a rough time of it either.There are Pygmy Mammoth bones on this side of the channel as well.

12:35 - I think the native Chumash made the arrowhead, not Indians.

Has this devolved into a discussion on whether Chumash are also called Indians?

Quite right Patti. Golden eagles were relocated to nest on the Channel Islands by the National Park Service.

Non-politically motivated question. (Shouldn't have to qualify it, but y'all know how often these things veer off-course.) Does the fire department know how it started yet?

I feel sorry for your