This is a view of the Herbal Angels cannabis operation on Cebada Canyon Road today. It was raided by the Sheriff’s Cannabis Compliance Team in December and has since been dismantled. (Photo by Melinda Burns)

The county Planning Commission voted 5-0 this week to lay the groundwork for denying a zoning permit to Herbal Angels, a cannabis operation near Lompoc that was raided and shut down last year by Sheriff’s deputies. The operators proposed to grow 17 acres of cannabis, mostly under hoop-houses, and erect two large processing buildings next to a rural neighborhood in Cebada Canyon, off Highway 246.

The unanimous vote sends a strong signal that the commission does not view industrial-scale cannabis operations as a good fit for residential neighborhoods, even rural ranchette neighborhoods such as the one on Cebada Canyon Road, where, prior to the raid in mid-December, Herbal Angels had been growing cannabis for three years. On Wednesday (May 27), the commission directed county planners to draw up the findings for denial; the final vote will be June 10.

Steve Junak, a Cebada Canyon resident, said he and his neighbors were “very happy” with the commission’s vote but should not have had to suffer so long with the offensive stench of marijuana, big commercial truck traffic, loud generator noise, ugly hoop-houses, disruptive nighttime lights and mysterious traffic at 3 a.m. in and out of Herbal Angels. 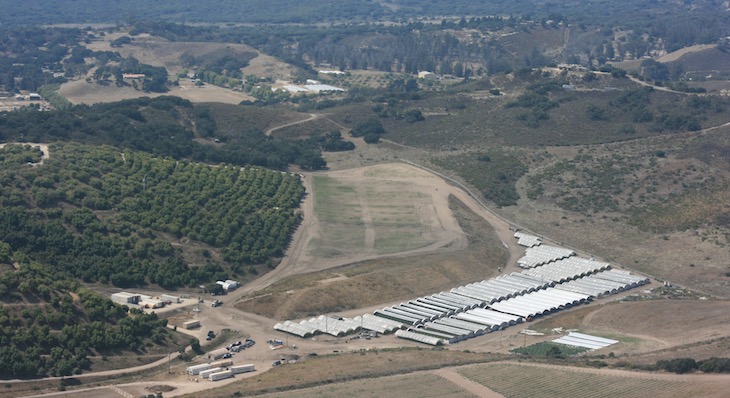 The now-defunct Herbal Angels cannabis operation on Cebada Canyon Road off Highway 246, shown here with four acres under hoop houses, is headed for a permit denial by the county Planning Commission. The operators were requesting a permit for 17 acres of cultivation, plus two large processing buildings. In the background is the rural ranchette neighborhood of Cebada Canyon. (Courtesy photo)

“Santa Barbara County has just rushed into this without carefully thinking about the impacts on residents,” Junak said. “That’s not good planning. If you’re a neighbor of one of these ‘grows’ and you’re upset at what’s happening there, you’re not getting any relief for years. The county doesn’t do anything about it. That’s not fair.”

The voters of California legalized marijuana for recreational use in 2016; the industry has spread rapidly in this county from the Carpinteria Valley to the Santa Ynez and Lompoc valleys. County records show that there are six other cannabis operations in Cebada Canyon besides Herbal Angels, all of them lessees operating without zoning permits.

The commission’s vote comes on the eve of next Tuesday’s (June 2) county Board of Supervisors hearing on whether to demand conditional use permits for all cannabis cultivation and processing – stricter zoning permits that require compatibility with the surrounding area. Under the county’s current cannabis ordinance, only those projects located within or next to “existing developed rural neighborhoods,” or EDRNs, need conditional use permits.

In the North County, there are 54 such rural neighborhoods, places that were zoned for low-density agricultural and residential uses. Cebada Canyon is one of them, with 110 residents living in 50 homes, each on about 20 acres. A number of the residents board horses, raise a few goats, or grow hay and wine grapes. It’s a box canyon, and the two-lane road in and out is narrow and winding.

The residents of Cebada Canyon and Tepusquet Canyon north of Sisquoc want the county to ban cannabis cultivation outright in or around rural communities such as theirs.

At the end of Cebada Canyon Road, just outside the boundary of the residential neighborhood, the Herbal Angels operators, Eli Sheiman and Mariette Wingard, proposed to grow 16 acres of cannabis in hoop-houses and one acre in greenhouses, six in all. In addition, they proposed to construct two two-story buildings for storing, drying and processing cannabis, 12,000 square feet and 40,000 square feet in size; and four water tanks, two of them large enough to hold 200,000 gallons each. The operation would need 20 full-time workers, plus 36 more during four yearly harvests.

The property covers 102 acres and includes a large avocado orchard. It is owned by Avo Vista Farms LLC, a shell company with opaque ownership, registered with the Nevada Secretary of State. Some Cebada Canyon residents have called Avo Vista a “zombie” firm.

On Wednesday, Zoe Carlson, an agent for Herbal Angels, told the commission via Zoom, “This is the third hearing on the project.”  The hearing included two dozen call-ins from the public and emailed letters that were read into the record, none in support of Herbal Angels.

“It’s been over a year since staff has had our information, and the application has been deemed complete for eight months,” Carlson said. And in a letter to the commission, she concluded: “The applicant has been proactive, responsive and provided all relevant material …”

In a May 21 letter to the commission, Bradley Johnson of the Sacramento law firm of Harrison, Temblador, Hungerford & Johnson, representing Herbal Angels and Avo Vista, said the commission had “no legal basis” to reopen the public hearing on May 27 because “no new information has been submitted by the applicant and no substantial changes have been made to the project since the April 8 hearing that would warrant additional public comment.”

“… Reopening the public hearing on the project for a full project presentation on May 27 will result in substantial costs to the applicant and further infringement of the applicant’s rights to due process and a fair hearing,” Johnson said.

But the commissioners said the Herbal Angels application merited all the time they were spending on it.

“My main problem with the project is the size, bulk and scale of these buildings and their proximity to the EDRN,” Commissioner Larry Ferini, whose district includes Cebada Canyon, said. “It’s not compatible with that neighborhood; we’ve had every resident around, telling us that. I think there are better sites throughout the county for this project.”

In addition, Ferini noted that the Santa Ynez River Water Conservation District had submitted a letter to commission, requesting that the permit be denied. The district said that Avo Vista Farms LLC, the property owner, with Sheiman as CEO and “point of contact,” had failed to submit groundwater pumping reports or pay pumping fees since June, 2018 – reports and fees that the district requires as part of an ongoing effort to bring the groundwater basin into balance.

“It’s not helpful to their cause,” Ferini said.

The commissioners also noted that they had tried without success to elicit the real name of the property owner from Herbal Angels’ agents.

“I don’t want to contract with an entity that doesn’t exist,” said Commissioner Daniel Blough, who represents the Santa Maria Valley.

But mainly, Blough said, he was not convinced that a proposed vapor-control system of pipes around the greenhouses and along two corners of the property would work to reduce the smell of marijuana plants.

“If you can’t suppress odor at the property line, I’m not interested in approving the project,” he said.

Commissioner John Parke, who represents the Santa Ynez Valley and portions of the Lompoc Valley, said that a video submitted on Wednesday by John Stevens of Cebada Canyon was persuasive; it followed a truck as it repeatedly swerved across the yellow line on the narrow canyon road. Parke also praised a letter from Ramona Thomas, a U.S. Postal Service driver who delivers for rural routes, including Cebada Canyon.

“The growing cannabis traffic is worrisome because they don’t typically follow the speed limit and don’t yield,” Thomas wrote. “If the Herbal Angels project gets approved and large numbers of employee will be rushing to get to and from work, I fear for the safety of all delivery drivers whether it’s USPS or competitors.”

Finally, Parke had a warning for cannabis critics: “We should not take a ‘no’ vote on this project as a condemnation of this industry or an indication that we’re going to take the CUP (conditional use permit) as a ‘no’ vote. I think the industry has a place here in the county. I like the young people who are in it. But I don’t like the location on this project. This is a major industrial project … and these cannabis permits last forever. We gotta think about that.”

Sheiman and Wingard have 10 days from the commission’s final vote in which to file an appeal with the Board of Supervisors. Their lawyer, Rebecca Mendribil of Santa Rosa, did not respond to a request for comment this week.

During the December raid on Herbal Angels, Sheriff’s deputies seized $1 million in alleged contraband. Court documents show that Sheiman has been charged with two felony counts of perjury and falsification of public records, for allegedly lying on an affidavit in which he claimed that Herbal Angels was a “legal, non-conforming” operation – that is, that he was growing medical marijuana there before 2016.

Sheiman and Wingard were each charged with two misdemeanors, for alleged cultivation of more than six cannabis plants and possession of marijuana for sale in violation of the state Health and Safety Code.

Herbal Angels has been suspended by the California Secretary of State for failure to pay Franchise Tax Board charges. In a claim filed on Jan. 15 in Santa Barbara County Superior Court, the state is seeking the forfeiture of $202,873 from Herbal Angels – cash that may have been found onsite during the raid.

Both the criminal and civil cases have been put on hold during the coronavirus pandemic and there are no dates for rescheduling, the county District Attorney’s office said this week. 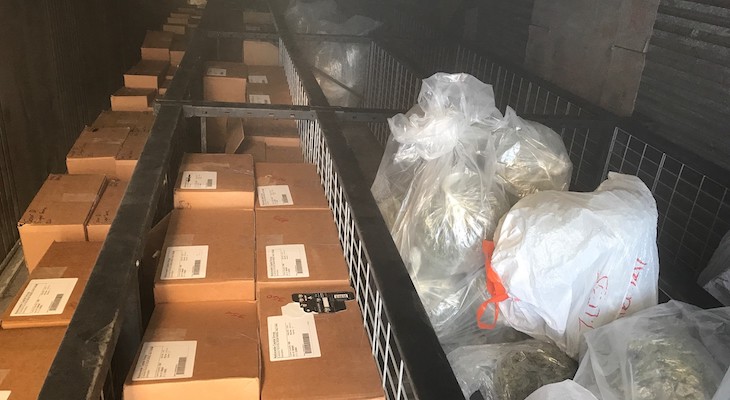 December 17, 2019: One Million Dollars of Cannabis Products Seized in Raid

This virus is not a question

less than 1% of those

If it's an umbrella tree, I