Meet Dagny, a Baldwin steam engine. It operated at the end of Rutherford Street in the 1960s, but not many folks remember this lost bit of Goleta history. But why was it there?

Because this quirky young gentleman wanted it to be there! This is Phil Goldman, and those sugar containers on the table in front of him are the reason he could afford the whimsy of a miniature steam engine. Confused? I bet. Let’s back up…

This sleek and stylish jar is called a Dripcut-Starline sugar dispenser. It seems mundane to us now, but it was revolutionary development in the restaurant world that brought the Goldman family great success.

During World War II, Phil’s dad, Maurice Goldman owned a diner in Los Angeles. After the war, Maurice bought out a struggling product line of restaurant equipment, including salt and pepper shakers, sugar dispensers, napkin dispensers, and so forth.

In 1955, Maurice hired an industrial designer to make a better sugar shaker. They knocked it out of the park with an attractive, sturdy and functional design. This simple appliance was soon a regular sight on every restaurant table across the country. In turn, Dripcut became a very successful business.

By the mid 1950’s, Maurice Goldman had enough of L.A. and decided to move his business and his family to the quaint little town of Goleta. He bought a lot at the end of Rutherford Street and made plans to build a new factory. This was the view from near his new location on Rutherford, looking across to the Dawson Street intersection. The building on the left today is Macaluso Pools.

By 1958, the new Goleta factory was up and running, Maurice was loving his new town and his two sons, Howard and Phillip, were fully involved in the business. Phil was employed on the marketing side, and Howard worked in manufacturing. The brothers were both very different, but they both were fans of transportation. Howard loved cars and airplanes, Phil was a railroad and train enthusiast.

Dripcut continued its successful run in the restaurant appliance business, and they advertised their new location on their products. ( OK, they put Santa Barbara, but we’ll forgive them.) 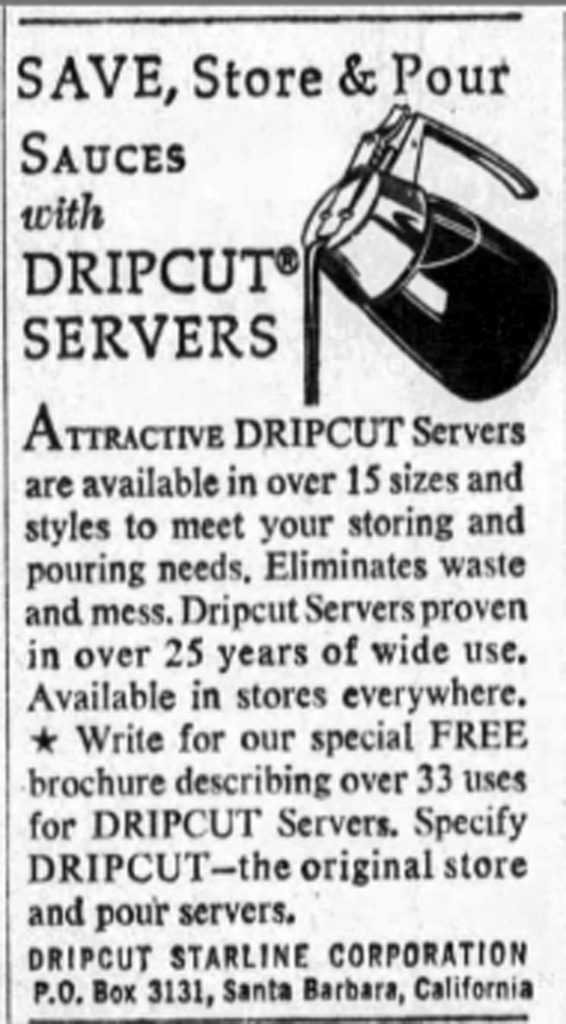 Personally, we had this set in our Goleta home. I believe my mom got it with S & H Green Stamps.

OK, but what about the train? So, in 1961, not long after they built the brand new factory on Rutherford, Phil somehow got the wild idea to build a little train track around the building, and get a real train engine to drive on it!

How he got the green light for this project, we have no idea, but Phil traveled to all the way to Japan to find the perfect locomotive for his private railroad. What he found was a rare Baldwin tank engine, made in Philadelphia in 1927 for the Kiso Forest Railway in Japan.

The Kiso Forest Railway was a narrow gauge railway built to support the logging of cedar forests in the Kiso River Valley in Japan in the early 20th century. By the mid 1950’s, they were being replaced by diesel locomotives.

Phil went up to the Port of Alameda near Oakland to witness the arrival of his new toy. Notice he has his camera behind his back. To his surprise, there was a second Baldwin being delivered to another enthusiast in California!

The little steam engine #7 was loaded onto a truck to finish the long journey to its new home in Goleta.

Next the steam powered locomotive was safely delivered to a small piece of track at the end Rutherford Street.

Notice the crowd of kids watching in awe through the fence. Goleta Union School was right next door.

Once safely delivered, the old engine went straight in for a complete makeover….

Meanwhile, Phil assembled a team of able bodied gentleman to build a custom track, just for his new locomotive. Notice the three rails? More on that shortly. Also, notice behind them, the Michelle apartments had not been built yet.

His crew got busy building 600 feet of narrow gauge train track around the Rutherford property, through the parking lot and ending inside the building.

We also had to pause to notice this classic Snap-0n Tools truck parked in the background. And the trailer park behind it still exists on Rutherford.

Soon, the old #7 re-emerged as “Dagny”, named after the heroine in the Ayn Rand novel “Atlas Shrugged”. Phil named his new endeavor the “La Goleta and Shoreline Railroad”. He printed up tickets, made timetables and even made brochures!

Remember the third rail on the track they built? This is the reason. This retired 1906 street car was given to Phil by the mayor of a Japanese town. While visiting, Goldman had asked to buy one of the old street cars to carry passengers behind his new locomotive, and the Mayor made it a gift. The different widths of the steam engine and the street car made a third rail necessary to make it all work together.

The La Goleta and Shoreline railroad made appearances now and again, maybe once or twice a year, but most Goleta folks had no idea there was a railroad at the end of Rutherford Street. It was a pretty well kept secret.

Goldman briefly used “Dagney” in Dripcut advertising, but the connection between a steam engine and a sugar shaker was tough to nail down.

The La Goleta and Shoreline Railroad made its last run in 1974, and then it was locked away and forgotten.

Until 1998, when Phil allowed the San Luis Obispo Railroad Museum to get Dagny out of mothballs and move her up to Atascadero, where a track would be built.

Soon enough, the track was built and Dagny was restored to her previously pristine condition.

Phil was so pleased with their work, that in 2003 he generously donated Dagny to the SLO Railroad Museum. Thanks to Phil Goldman’s enthusiasm for trains, future generations will be able to see a live, steaming locomotive in action.

The SLO Railroad Museum added Phil Goldman’s
name to the side of Dagny’s cab to honor his donation.

While Phil was obsessed with railroads, his brother Howard was a fan of fine motor cars. The Goldman brothers had gone to school in Los Angeles with Al Moss, (above) a sports car enthusiast. Right out of high school, Moss opened a repair shop specializing in MG sports cars. Being a car guy, Howard Goldman stayed in touch with Al Moss and bought some beautiful cars from him.

In the late 1950s, when the Goldmans relocated to Goleta, Howard told Al Moss he should do the same. In 1961, he did just that. Al Moss built a two story building on Dawson Avenue, right down the street from Dripcut, and moved his Moss Motors to Goleta. Moss was very successful and became a leader in his industry.

In 1977, Howard Goldman offered to buy Moss Motors from his old friend, and Al Moss accepted in 1978. A few years later, the Goldmans sold Dripcut, and a few years after that, Moss Motors moved into the former Dripcut location on Rutherford.

And that’s where Moss Motors continues to thrive to this day, under the leadership of Howard’s son Robert. And while a Goldman is still very much involved in the business, all signs of uncle Phil’s La Goleta and Shoreline Railroad have been erased. May the memory live on… 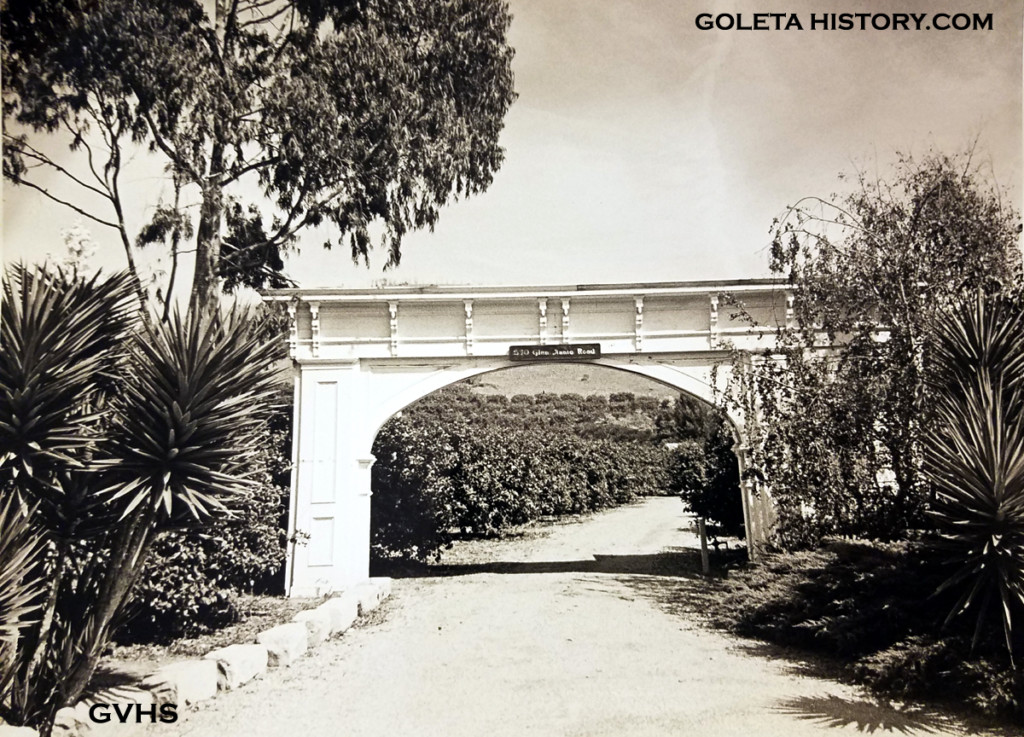 One Final Note- Howard Goldman was also responsible for saving the precious Goleta monument shown above from the wrecking ball. And it still exists! Read all about that HERE.

Traditional gets my vote.

Crocodile tears by Bigone who

There are Bald Eagles that

This is not a worthy thing

POMO? What insider stuff are

I wonder why they feel

Traditional gets my vote. We

Let her go man not worth it