The fight left two Santa Barbara residents in the hospital with what appeared to be stab wounds.

Detectives arrested Christian Menth, age 22, and Miguel Ascencio, age 18, for conspiracy and attempted murder for the benefit of a criminal street gang. Both subjects were booked at Santa Barbara County Jail on warrants with $600,000. Bail.

When Santa Barbara Police Officers arrived to the scene, no involved parties were located.

The Santa Barbara Police Investigative Bureau was called to assist and the investigation remains ongoing. 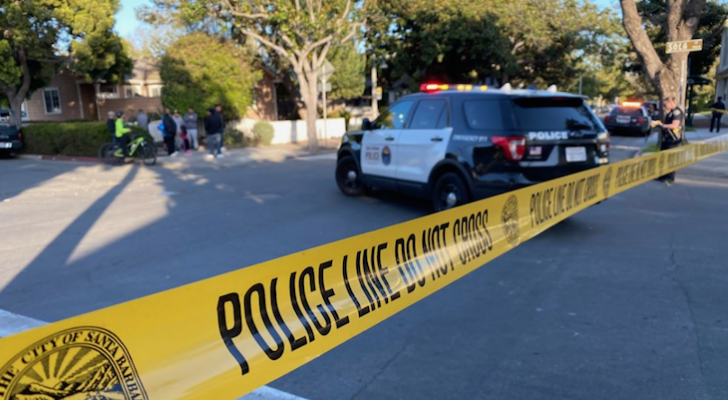 Report of six males beating a car with baseball bats near Bohnett Park at San Andres and Sola Streets. One allegedly had a hammer but a gun was seen on a suspect.

Fire Department and Medics responding to the 300 Block of West Canon Perdido for an injured subject..

On 2 at Bohnett Park one at gun point others running.

Victim has been stabbed..

Outstanding subject wearing a grey Hoodie went through the creek..

Outstanding suspect is in the creekbed..

Police swarming the area... 2 staged on 1300 blk San Andres at Victoria st, right near the little Park, and access to the creek.

CSI to Wash and Fun where a weapon was possibly discarded.

So the stay at home order only applies to who? Wasting very much needed resources on nonsense. If they were minors where are the parents, if adults how selfish. If minors the parents should be billed for All expenses and if adults also be financially responsible!

It doesn’t apply to gang members apparently as we have seen in the last few days. Expect the next stabbing/ shooting be on the east side. They are taking turns stabbing each other. In the meantime they are exposing themselves, their families and law enforcement to unnecessary risks to deal with their behavior. Plus the hospital staff who now have to deal with a stab wound. Maybe after this pandemic is over we can finally discuss a gang injunction.

The stabbing on the EastSide was the day before...

The gun seen is possibly a pellet guy..PD is on a group of 10 subjects at San Pascual and Canon Perdido..

Not sure I heard it right but there might be another 245pc assault victim at Cottage I guess some people are board sheltering at home..

You mean bored not board(wooden).

I guess our beautiful city not taking the current Worldwide Pandemic seriously we live in a bubble that won't be penetrated. Hopefully our Corona virus numbers won't increase rapidly but when they do you can thank the people who were participating in non essential activities.

Not really sure why people think that stay at home orders are going to keep gang members inside. They don't usually follow instructions.

So they release many people from the jail early and now we have an increase in crime. Who'd have thought...

There was a spike in gang activity before the quarantine..

Gosh. Thanks so much for supplying that riveting rebuttal to Roger’s reply.

Gosh. Thanks so much for supplying that riveting rebuttal to Roger’s reply.

But isn't gang banging on the list of exempted / essential activities?
I always thought it was...
Bang on.

@SBNATURAL- They are the vital Meth suppliers for the transients and local meth-heads- Enough to keep them in business and enough to fight over selling turf- There's plenty of Meth-heads in Santa Barbara / Goleta to support this lucrative business.

So, where has our USELESS Councilmember Oscar Gutierrez been during this time? He has not come out ONCE for the Westside District with instructions on what to do and expect during this precarious time! I guess he will just sit there as he does at the City Council Meetings like a DOOFUS!!! Keep voting for INCOMPETENCE, IGNORANCE, and INEXPERIENCE and this is who you will get time after time!

Unfortunately, he has company on the eastside, with that representative.

Nice attacks on our local pols, but I get my Covid info from the County health department, not a councilmember that is tasked with keeping the trash collected and streets swept. But I will tell Oscar you think his input is critical to your life.

Hello A-1585616597,
I'm pretty sure you and I have communicated in the past and you are fully capable of knowing how to find all the information I have be sending out to the public.

I've been posting multiple messages and videos about the virus multiple times a day on multiple platforms like Facebook and NextDoor and in Spanish. All you have to do is look me up and the rest of our Council Members. Furthermore, I am the adviser to the SB Youth Council where we recently produced public service announcements to combat youth violence and underage vaping. I'm also on the South Coast Youth Safety Partnership, the Community Corrections Partnership and its Racial Equity Sub-Workgroup.

I was helping plan a youth summer camp, bringing HomeBoy Industries to SB and I was starting a video production program with juvenile probation and the county jail to educate our youth and at risk population until the pandemic started.

So to say that I'm being silent is just flat out wrong, inflammatory and slanderous .

We had a meeting earlier today with our community leaders and SBPD to come up with solutions with this spike in violence. Will be reporting out on that soon.

Two groups fighting over territory is called a war. Each side is responsible for their own armament, provisions and medics. That's what gangs are. Let them supply their own medics and provisions. Known members of gangs shouldn't get access to what amounts to 3rd country support. They've chosen to be 'countries' unto themselves, not contibute to the 3rd country's economy or obey by the 3rd country's laws. Only when they kill/steal/ruin some part of the 3rd country's persons or assets, do they become of interest. Let them fight out their petty garbage and offer medic training as a gesture and p.o.w. confinement if they overstep, but if they want to kill/steal/ruin each other, let'm.

You don't know if they are Mexican nationals or Mexican Americans. I would assume the latter. Second, they ARE kids, or at least adolescents/young adults and their brains are not wired like an adults, not to mention their behavior is culturally askew of our society norms. Putting them in jail for the rest of their lives is not the answer to gang violence in our community. We ARE making strides in changing the culture and behavior. Yes, this kind of thing stands out in the news. Domestic violence is far more prevalent but that doesn't often get to the headlines, especially if the perp is white and affluent. Sometimes it does, if the person is a celebrity. There's lots of stuff bad in our society. Fixing it does not always require locking them up.

True, that fixing problems doesn't always need locking up, but stabbings should not be equated with domestic violence. Along with an offense against specific individuals of maybe a different group, these acts are also offenses against society as a whole. ...I don't live there but I imagine that with such violence quite a few peaceful people are afraid of taking needed fresh air walks in _their_ neighborhood.

Also, GINGER, “Putting them in jail for the rest of their lives is not the answer to gang violence.” But jail is the ONLY answer for someone who stabs people in hopes of killing them. Are you arguing that the stabbers shouldn’t go to jail for a long, long time?

Seriously? You people have a real problem if you believe the culture of violence against [place any ethnic, social, socioeconomic or gender group here] cannot be changed without locking up the perpetrator.

The cops know who all the bangers are and where they live but, civil rights, ACLU lawyers, etc. why can’t the city sue these criminal organizations? Use RICO laws and even the IRS just like Capone. Clean this filth up now please.

Gee, another "easy" solution that is not being used by anyone. Maybe it is not that easy? But I'm sure an anonymous internet poster is smarter than all of the the peoples' attorneys in the US.

Boris is a true blow hard.