[On March 19], state and federal agencies published a proposed settlement agreement with Plains All American Pipeline (“Plains”) in response to the May 19, 2015 Refugio Oil Spill. This spill resulted in hundreds of thousands of gallons of heavy crude along 150 miles of the California Coast, from Gaviota to the Channel Islands, and as far south as Orange County. The spill closed public beaches and parks, 138 square miles of fisheries, and killed hundreds of marine mammals and seabirds. The public has until April 18 to comment on the settlement. The agreement would set the amount of penalties and damages that Plains would pay to state and federal agencies to compensate for the harm from the massive oil spill and to pay for restoration projects. In addition, the agreement would allow Plains to restart the damaged pipeline. The Environmental Defense Center has several significant concerns with the proposed settlement.

“First, until we see the data on which this proposed agreement is based, we cannot be assured that the payments will be adequate to fully compensate for the harm caused and to restore our precious coastline, said Linda Krop, Chief Counsel for the Environmental Defense Center (“EDC”).  ”The settlement with Plains All American Pipeline locks in the amount of damages to be paid, before the public has an opportunity to comment on the draft assessment of impact to the environment and public recreation, and the draft determination regarding the amount of money necessary to mitigate for such harm and restore the environment to its pre-spill condition.”

The settlement is based on state and federal laws imposing civil penalties for the illegal discharge of hazardous materials, including crude oil, and requiring restoration and compensation for harm to wildlife, habitats, and public recreation. The law requires that the environment be restored to its pre-spill condition and that compensation be paid for the harm that occurred.

“We are concerned that the penalties may be too low because the settlement is based on an estimated spill size of 123,000 gallons of oil, versus the estimate of 450,000 gallons put forth by scientists at the University of California, Santa Barbara,” noted Krop.

In addition to civil penalties, the Consent Decree includes damages under the Oil Pollution Act of 1990.  Such damages must be adequate to compensate for the harm to wildlife, habitats, and public recreation, and to restore the environment to its pre-spill condition.  Any settlement with Plains must be based on a Restoration Plan that is made available for public review and comment.  In this case, however, the Draft Restoration Plan has not yet been made available and there is no Final Restoration Plan, so it is impossible for the public to determine whether the payments provided in the settlement agreement will be adequate to implement the necessary projects.

Finally, the proposed Consent Decree includes measures that Plains must adopt to restart the pipeline or build a replacement pipeline.  “We are concerned that the proposed settlement would allow Plains to restart the existing pipeline, which is seriously corroded and poses unacceptable risks to the environment and the public,” said Krop.

“Our community has suffered so much from the impacts of the Plains All American Pipeline oil spill on our beaches, environment, businesses, and community.  We need to protect our coast from the risk of another oil spill, and we need to have a say in the projects that will restore our coastline before a final settlement for damages is reached,” said Krop.

EDC will submit a formal request to the agencies, asking them to consider the spill estimate from the UCSB scientists and to hold off on any further action regarding the proposed settlement until the restoration planning process is complete. 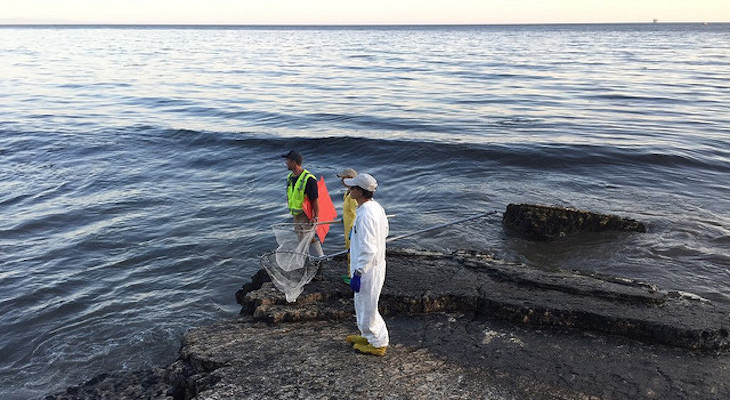 Dr. Ansorg needs to be fired.

Great idea! Thanks to them!

This is from an email I

Drive is upside down and

there are a dozen projects

Rollover Jeep in the center